I got a phone call from London, it’s the Australian opera singer, Saira Luther. Saira’s brief wanted her 30 minute comedy opera routine filmed for promotional purposes.  I had to be discreet, as it was a private function. The venue is Rudding Park in Harrogate in front of an audience of 60 private guests. So here is the making of a Stand Up Opera Promo.

I decided that the easiest way would be to film the show with two cameras and get a sound feed from the audio system. My Sennheiser XLR line transmitter would send the sound to one camera, and use my Sennheiser microphone to capture ambient sound for the other camera.

One of my Canon 5DmkIII’s with the standard to wide lens set on an un manned tripod to capture the stage area and audience sound. The second camera mounted on a tripod at the other side, with my 70-200mm lens. This captures the live audio feed and close ups of the presentation. The client’s sound engineer mixing their duets during the show allowing me to concentrate on filming the action. In the edit a good sound balance between the audio of the audience and the stage performance is useful.

Stand Up Opera Piece To Camera

A short piece to camera would be recorded before the performance to introduce the montage in the final promo video. I also recorded an interview with Saira to add as a voice over to the Stand Up Opera promo. My LED panel lights, a key and backlight, lit the spare room to capture the interview. My bright idea to use three battery lights behind glass bottles on the shelf, made for an interesting and colourful background. I was very happy to capture a moody and intimate atmosphere.

The final promo montage allows just three minutes to give a brief overview of the Stand Up Opera. So, I laid the wide safety shot on track one and lined up the audio channel of the close up footage to sync. I then chopped in and out of video track one, dropping the clip luminescence so the time line would cut to the wide shot underneath. This gives a quick edit and the pictures remain in sync, if I need to adjust any of the shots. A title caption is added and the complete 30 minute video rendered, for the client to choose which shots she wanted in the montage.

Editing  The Stand Up Opera Promo

In the mean time I got to work on creating a three minute promo version. To start, the piece to camera is added along with the interview footage. Gaps are created to extend to the three minutes. Next I found the part of a duet where they were singing together. This was laid above the interview video track so it aligned exactly when Saira stopped speaking.  Then back referencing the music to the start of the video to align it’s audio underneath the caption title and introduction. The comedy bits added, some in vision and others with live sound in chronological order of the performance.

Finally the Stand Up Opera ending is timed to coincide with the promo ending. Again back timing it to start at the end of the interview audio. After a little experimentation and suggestions from Saira the final version was completed and Saira uploaded it to her YouTube channel.

It was then a fairly simple job to duplicate the edit and lose any footage that wasn’t required. As usual the final edit was transferred by www.wetransfer.com for the client to upload to YouTube and embed into their website and their agents. 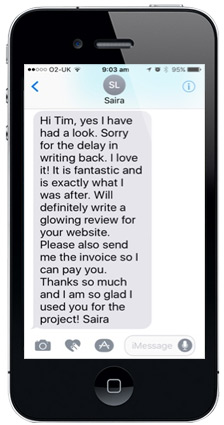 “Hi Tim, yes I have had a look. Sorry for the delay in writing back. I love it! It is fantastic and is exactly what I was after. Will definitely write a glowing review for your website. Please also send me the invoice so I can pay you. Thanks so much and I am so glad I used you for the project!” ~ Saira

Do you have a creative or promotional plan and your idea is to have a video showing your product or service on your website? Then please get in touch and have a chat about how together, we can get your ideas into action.

This site uses Akismet to reduce spam. Learn how your comment data is processed.