Sometimes I am asked to edit on location for a fast turnaround of a job. For this I use my HP laptop SSD with 8Gb of RAM and an external 1Tb hard drive. All I need is a desk, mains supply and headphones to create the magic.

Editing on the Plymouth to Sheffield Train 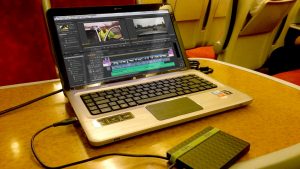 On a recent job for Amey Plc I utilised the 5 hour train journey to get an edit in the can. Although there was a few tweaks and amendments, by the time the train pulled in to the station I had managed to edit and compress the shots into the required time slot sequence. Complete with voice over, captions and music. All that was left to do was add the sound effects and export the HD project and send the version via WeTransfer to the client who then shared it with their client Plymouth City Council. 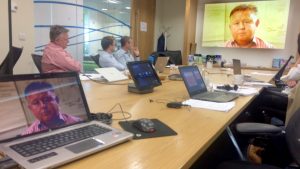 This example isn’t really full blown editing, but it does show that I can quickly film an interview and play it back to an audience to critique. In this case it can be done within a few seconds, just as long as it takes to transfer the SD Card from camera to laptop. At the end of the media training session I can assemble the clips onto a USB Drive for each participant to take away with them. 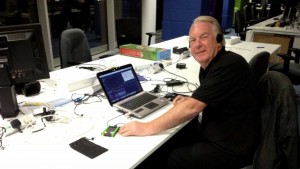 Other times it’s not so demanding. From the start of the football season, I film a couple of interviews from football players after the Manchester City home games, on a regular basis. This is filmed in front of a chromakey green screen. There are three versions of sponsors background to be keyed onto the edited interview. It’s then sent direct to the sponsors as quickly as possible after the match to be used on their websites.

Often the edit isn’t as hurried, as the client only needs a rough edit after their presentation. This can be done on my own at a spare desk in an open plan office, listening on headphones. I always have a good feeling when I create, from nothing to something almost tangible. And the hope is that it moves people emotionally and leaves them with a lasting warm feeling or it moves the audience to an action. 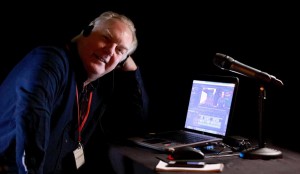 As a camera man I am often seen dashing around conferences with my camera. This is always for an overview of the event. Sometimes it’s edited on the day to be played in at the end of the conference, as a final roundup and conclusion of the event. What I like about editing is adding pictures to music that tell a story. When it’s right the pictures and music it really creates an experience, almost of a different dimension. I love it! 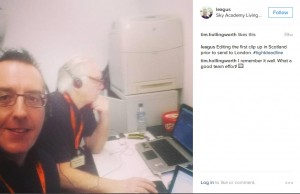 One memorable edit was for the #iWill Campaign in Livingston Scotland at the Sky Academy Skills Studio. There were four crews in different parts of the UK and we all had to edit two clips from our footage into a 70 second piece to be sent down to London to beat the 13:30 deadline. Myself and Andy from Leagus were working for Paradigm Creative and had filmed a couple of interviews and several groups of people learning the basics of video. Then I had an hour to edit all the footage to make a sequence, render it, then upload to Wetransfer. To be downloaded to the venue and the four clips assembled ready for playing out.

It was played out as “live” at a presentation delivered by Prince Charles to a large local audience and streamed live back to the four venues, where our interviewees were part of the audience.

Do you Need a Fast Turnaround Edit?

So if you need a shoot with a very fast turnaround on the day then I may just be what you are looking for! To get in touch please visit the Contact Page, thank you.